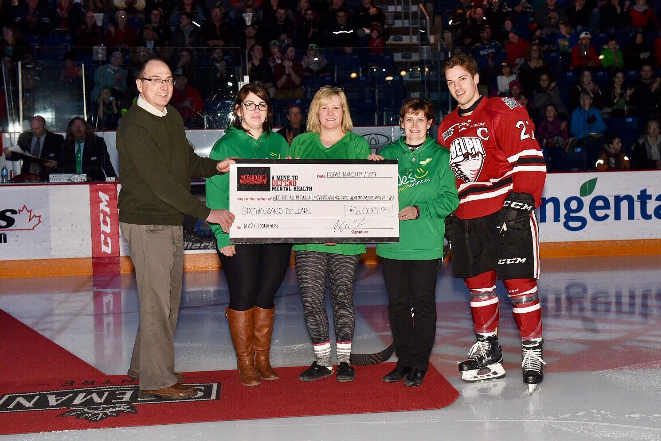 Toronto, ON – The Ontario Hockey League announced that defenceman Garrett McFadden of the Guelph Storm is the 2016-17 recipient of the Dan Snyder Memorial Trophy awarded annually to the OHL’s Humanitarian of the Year.

In September, 2016, the Storm captain introduced ‘McFadden’s Movement’; a mental health campaign that strives to change, help, and develop mental health among athletes.

“It’s an honour to win the Humanitarian of the Year award, and to be recognized under Dan Snyder’s name,” McFadden said.

“I want to thank everyone from the Guelph Storm and Steph Coratti, as well as the Canadian Mental Health Association, Wes for Youth, and everyone else who has done anything to make this foundation possible. It’s been an amazing experience and I have got to meet a lot of special people who share the same goals of making mental health something that is talked about.”

Directly affected by the loss of a close family friend, Wes Cameron, to suicide in 2011, McFadden has drawn on his own challenges when connecting with youth. This season, McFadden has been hosted by 15 different minor hockey teams and local schools highlighting the pressures of sport and the importance of talking about mental health and eliminating the stigma.

McFadden’s Movement was designed and launched in partnership with the Canadian Mental Health Association, with all youth presentations accompanied by a CMHA professional and paired with McFadden’s own SafeTalk training received through the league’s Talk Today initiative.

The Movement has also included a strong awareness campaign powered through social media, the sale and distribution of over 1,500 program wristbands, as well as fundraising for mental health resources supporting Wes for Youth Online – a free counselling service created in memory of Wes Cameron, and CMHA Waterloo Wellington branch. To date, the Movement has raised over $7,000, with future events designed with the goal of keeping the conversation going.

“The combination of hearing Garrett’s story and being able to share CMHA resources with young people has had a great impact on our community. As a leader on the Guelph Storm and a recognizable athlete in the community, he is using his position to help share important messages with young athletes.”