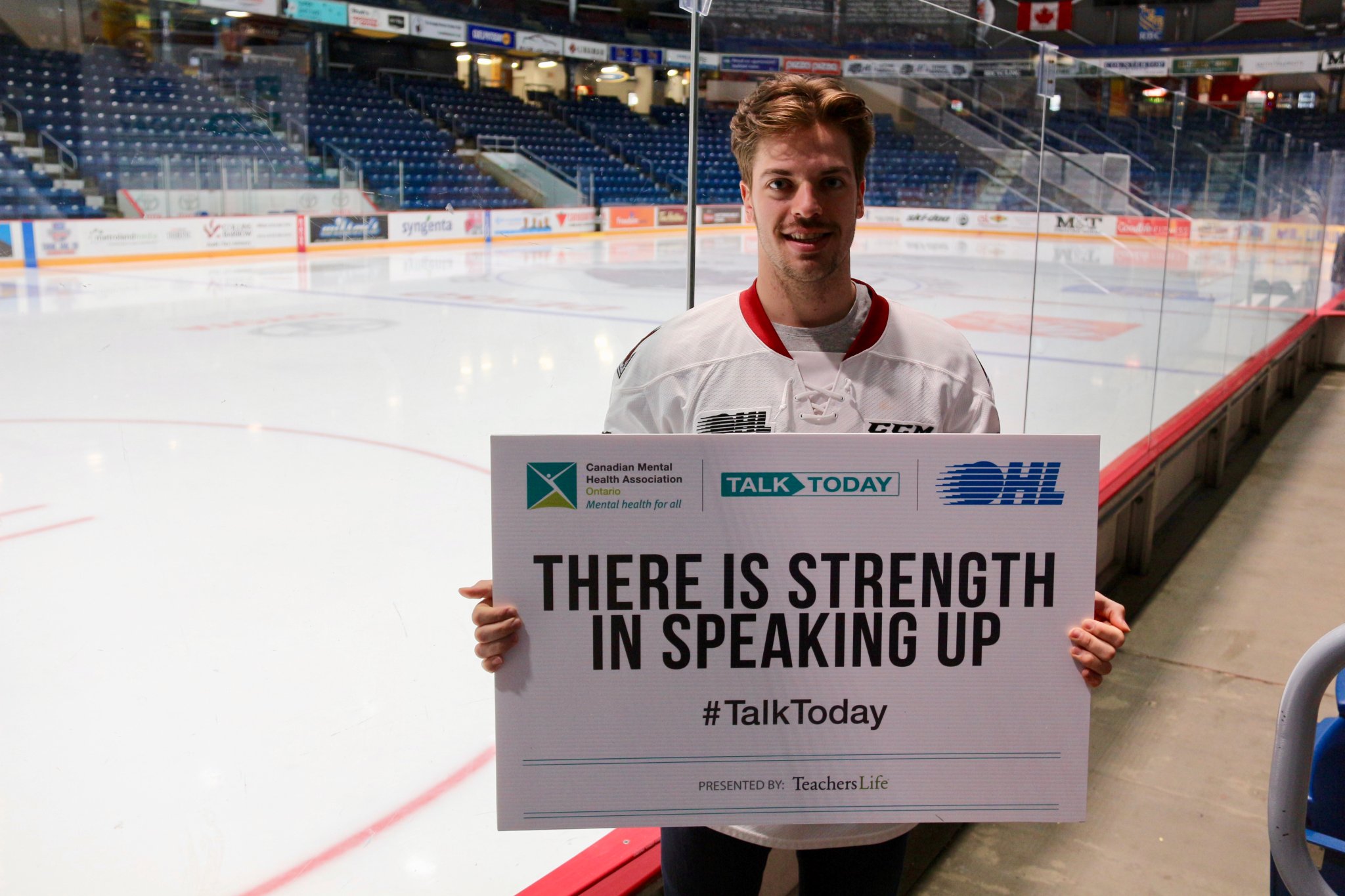 Mental health affects us all. This February, the Canadian Mental Health Association (CMHA), Waterloo Wellington branch is teaming up with the Guelph Storm and Kitchener Rangers to raise awareness about the issue in their fourth annual Talk Today awareness games, presented by Teachers Life.

The campaign is part of an ongoing partnership between the Kitchener Rangers, Guelph Storm, and CMHA Waterloo Wellington to educate players about mental health and suicide prevention. Across the CHL, players receive safeTALK training, designed to give them the skills to recognize suicide risk and refer someone to support in a time of crisis. Teams are also linked to CMHA Mental Health Coaches, who can provide support and mental health resources to individuals in need. Each year, the Storm, Rangers, and CMHA also visit local schools to speak with students about coping with stress.

“These athletes are role models to so many kids in our community, and by giving them the skills to talk about mental health and recognize suicide risk, we’re creating a safer community—both in the locker room and beyond.” – Fred Wagner, Executive Director, CMHA WW

Did you know that mental illness affects 1 in 5 Canadians? Friday is our 4th annual Talk Today game with @CMHAOntario. Help us continue the conversation. #talktoday

“We are thrilled to partner with the Storm and Rangers for the fourth year of the Talk Today program,” said Fred Wagner, Executive Director of CMHA Waterloo Wellington. “These athletes are role models to so many kids in our community, and by giving them the skills to talk about mental health and recognize suicide risk, we’re creating a safer community—both in the locker room and beyond. To see the way [players like Storm captain] Garrett McFadden have embraced the cause as their own and become leaders for mental health advocacy in our community is inspiring.”

“Partnering with the Canadian Mental Health Association makes perfect sense for our club. We are proud to be part of the Talk Today program, and the skills that our players are learning are ones they will carry for life. This is about much more than just hockey,” said Rick Gaetz, Guelph Storm Partner and Governor.

“As an organization, the Kitchener Rangers strive to provide an environment for our players that makes them feel comfortable confiding in staff, management or their teammates regarding any issue whatsoever, including mental health,” said Alyscia Warner, Communications Manager of the Kitchener Rangers. “We hope that during our home game vs. the Sudbury Wolves on February 23, we also extend that comfortability to our fans and remind them they always have somewhere to turn if they, themselves, are struggling with their mental health.”